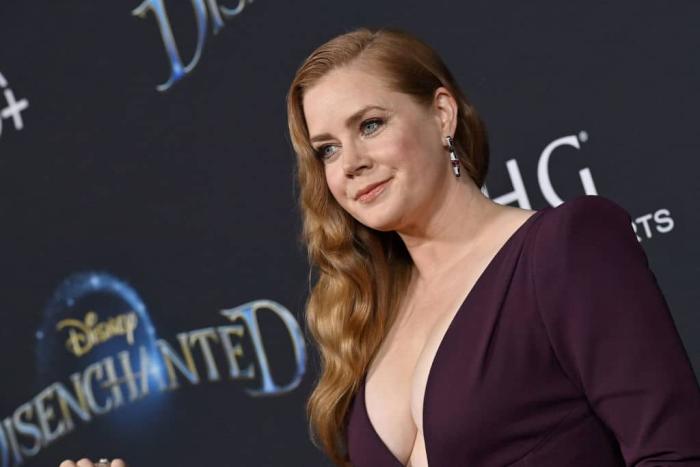 Amy Adams is one of my favorite actresses. I think she’s a truly luminous on-screen presence with range to kill for. It often baffles me in the most delightful manner to remember that this is the woman who did The Master and The Muppets in the space of a year. She’s a literal Disney princess AND a sultry con artist. It doesn’t hurt that she’s super likeable, beloved by all, and easy to root for. So, it’s no surprise that her current career slump has inspired much fascination and concern among Film Twitter.


The premiere of Disenchanted, the long-awaited sequel to Enchanted, happened with a fizzle rather than a bang. While fans were excited to see Adams return to the role of Giselle, the film itself was sorely lacking in the qualities that made the first film so special. It’s another critical disappointment in an era of Adams’ career that seems more defined by downs than ups, a stark contrast from the days where her mere presence in a project promised something special.

On paper, many of Adams’ choices over the past six or seven years make a lot of sense. Why wouldn’t a big star want to play roles like Lois Lane or Lynne Cheney? Surely it’s a safe bet to star in the adaptation of a major-selling thriller, a biography with major political resonance, and a Tony-winning musical about mental health? Nobody signs onto a movie thinking it’ll suck. Yet this streak of films varied from decent but overrated to totally execrable. She may have landed an Oscar nomination for Vice but she had so little to do in the film that one wonders how much of that industry-wide support came from actual appreciation of the performance. She’s an excellent Lois but an ill fit for Zach Snyder’s view of Metropolis (someone just let her and Henry Cavill remake the Dean Cain-Teri Hatcher rom-com Superman show already.)

Still, these felt like at least noble efforts, as misguided as they often felt. They didn’t land with a thud in the way that The Woman in the Window or Dear Evan Hansen did. Both highly anticipated films were critical disasters, with the former kept on the shelf for so long that even the most wide-eyed optimist couldn’t overlook the growing stench of failure surrounding it. The latter mostly elicited laughter and derision towards its star, Ben Platt, while Adams escaped with her dignity intact. That’s often a point you hear made in bad reviews of her work: sure, the movie sucks, but she rises above it. Sadly, even she couldn’t pull off that feat with Hillbilly Elegy, the unforgivable Netflix adaptation of a trash-bag of political propaganda that elevated its subject to the American Senate (that dishonor should hang over Howard for the rest of his career.)


Adams plays the drug-addicted mother of J.D. Vance, a perennial f**k-up whose myriad troubles are positioned as pure selfishness in the face of the protagonist’s pull-up-by-your-bootstraps smarm. While the role is thankless and the material is garbage, meaning that she can only do so much with what she was given, Adams’ performance is still astonishingly bad. She looks out of place, unable to fit into this world of working-class people beaten down by life. Most of the time, she seems parodically pretty, a movie-star in the real world. There are moments where she seems embarrassed by the terrible dialogue (not that we can blame her.) You wonder if Adams got to set and just gave up, unsure of what she was supposed to do with this character. That’s a major problem with the entire film, with Howard desperate to depoliticize things in favor of a more stock inspirational biopic narrative. The end result is failed Oscar bait full of actors unable to spin gold from sh*t.

It’s tough to overlook how frequent this gentle descent is for even our most talented of actresses. We may have somewhat moved on from the days of a woman’s career on the screen being over by 35 but progress remains incremental. Those juicy roles for actresses over 40 are growing in number but still seem to be dominated by a privileged handful of the most acclaimed cishet white women. Consider how long it took Viola Davis, an Oscar, Tony, and Emmy award-winner, to get the parts worthy of her immense talents. Meryl Streep is still getting award nominations well into her 70s but very few of her contemporaries are alongside her on that road, and Ryan Murphy can’t hire every grand dame of cinema for his middling miniseries. It’s no coincidence that many of these women have production companies to help grease the wheels of the greenlighting process in their favor. Reese Witherspoon and Nicole Kidman experienced refreshing new acts in their careers, and an increase in audience affection, through producing their own projects, primarily on TV. Of course, it’s not as simple as just deciding to be a producer and picking your own projects. It remains ridiculously tough and an exhaustingly convoluted process to getting your new film or series off the ground. Not even being an A-Lister can guarantee success. Just look at how many unmade projects are attached to Kidman, Cate Blanchett, Adams, and so on.

Adams’ slump hits differently because she’s so well-known and seemingly universally popular. You may know that the system sucks but there’s still a small part of you that hopes your favorites will be exempt. Yet here Adams is, suffering the same fate as so many actresses before her. It’s like the industry suddenly forgot how to use her properly. The narrowing of their vision for her aligns with the shriveled options for women over 35, certainly, although one would think that Adams had nothing to prove at this point in time.

So, how does she get out of this? We can hope that it’s a mere bump in the road, akin to similar eras suffered by the likes of Kidman. Her next project is a Marielle Heller drama, Nightbitch, wherein she’ll play a frustrated mother who believes she is turning into a dog. It’s risky material but that’s what we like to see actresses aiming for. The worst roles of the past few years of Adams’ career have been ones that seemed safe: prestige bait, kindly mothers or supportive spouses, women in trouble. She doesn’t need to go full Isabelle Huppert but perhaps Adams’ team can bring a sharper focus towards parts like her work in HBO’s Sharp Objects, which allow her to reveal the prickliness and cunning underneath her sugar sweet exterior. I’d love to see her work with Yorgos Lanthimos or Lynne Ramsay or reunite with Paul Thomas Anderson. Her options should be limitless. Here’s hoping the industry hasn’t closed all of the doors ahead of her.