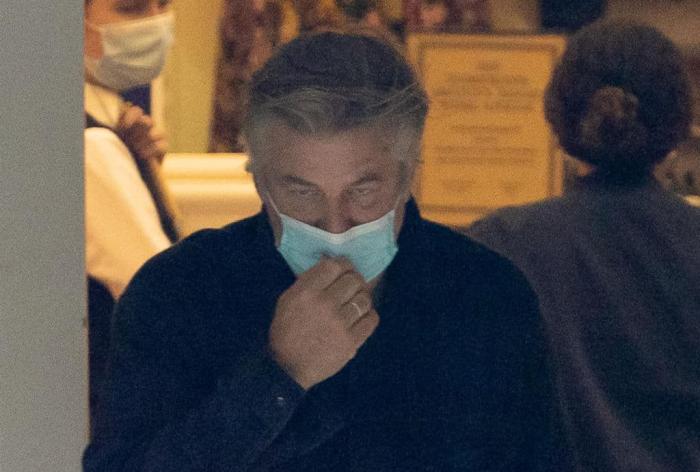 Alec Baldwin and his wife, Hilaria, have both deleted their main Twitter accounts just days after the actor gave an interview to ABC denying blame and guilt over the shooting of cinematographer Halyna Hutchins on the set of the film Rust. The accounts @alecbaldwin and @Hilariabaldwin are gone. The account for the Baldwin Foundation (@ABFalecbaldwin) has also disappeared. Their Instagram accounts, however, are still active. This isn’t the first time that Baldwin has left social media although it doesn’t feel entirely right to group this moment in with those given the context.

This internet deletion comes after Baldwin sat down for an interview with George Stephanopolous of ABC News. During their conversation, an emotional Baldwin said that he did not want to wait for the lawsuits or investigations to conclude before telling his side of the story. He detailed the incident that ended in Hutchins’ death, claiming that he had not fired the gun that killed her. Rather, he ‘pulled the hammer as far back as I could without cocking the gun. I let go of the hammer and bang, the gun goes off.’

Baldwin says that he did not realize the gun contained a live round until his interview with the Santa Fe County Sheriff’s Office. The criminal investigation into the shooting is still being conducted and two lawsuits have been filed since the shooting. Baldwin also said that he expects that Hutchins’s widower will also sue at some point.

The part of the interview that seemed to inspire the most ire was a moment when Baldwin was asked if he felt responsible for Hutchins’ death. He said, ‘Someone is responsible for what happened, and I can’t say who that is, but I know it’s not me.’ He also said he did not feel guilt over what happened because of this.

Baldwin is clearly walking a very fine line with this interview in terms of potentially litigious outcomes. He wants to explain ‘what really happened’ and his immense emotional response to the death of a colleague but not take the blame for it while an investigation is ongoing. It is certainly a bold strategy and not one I can imagine a lot of lawyers or publicists approving of.

Baldwin has never been one to shy away from confrontations and ill-advised public rants, and this interview seems to be cut from the same temperamental cloth. Who is this for? Does he want public opinion on his side? That would be tough for even Tom Hanks or Oprah to overcome given the circumstances. Is this to stick two fingers up at the bad-faith Trump-supporting losers who are gloating over a woman’s death to pwn the libs? That seems like a terrific waste of time. As many lawyers have pointed out online, this interview can and probably will be used against him in court. Baldwin claimed, ‘I’ve been told by people who are in the know and even inside the state that it’s highly unlikely I would be charged with anything criminally.’ Why say that out loud? That makes it seem as though you’re almost gloating over the tragedy. Besides, New Mexico officials have not ruled out charges against him.

Look, Hollywood is a popularity contest, a numbers game built on making sure that you have more power than anyone else through whatever means your large checkbook can afford. It’s unbearably sad and bad-taste for anyone to call up the media in such circumstances but it’s also extremely commonplace. ABC produced this interview like it was a true-crime special, which shows exactly where their intentions lay. Baldwin and a hell of a lot of people are now scrambling to save face, all while a young boy is left without his mother and the victim has become a ping-pong ball to be batted around by PR teams.

The stench of cynicism and total lack of empathy that came from this interview is stifling. Halyna Hutchins deserves better.


← What the Hell is Going on the Mean Ole' Kamala Harris? | Dexter Needs to Work on His Parenting Skills →