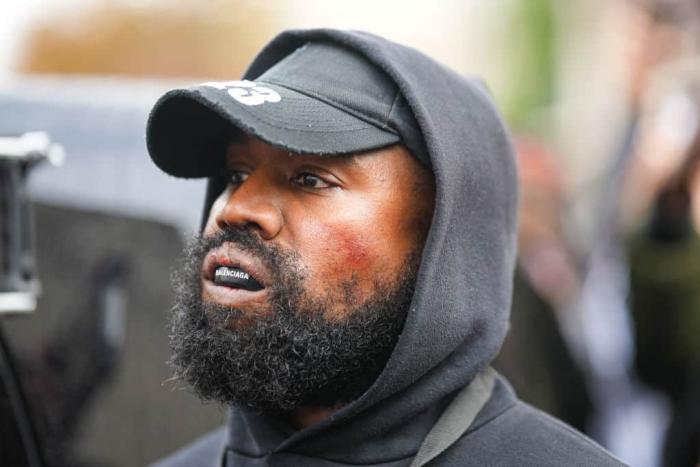 After a long and exhausting history of controversial remarks, public attacks, and various kinds of cruelty, Kanye West is finally facing some public pushback after a slew of antisemitic comments.

Pressure is growing on Adidas to drop West and his Yeezy line after West said on Twitter that he was ‘going death con 3 on JEWISH PEOPLE.’ After appearing on Tucker Carlson’s Fox News show, West doubled down on his bigotry, referencing various antisemitic conspiracies, such as the belief that Jews control the monetary system. He also claimed that someone had planted ‘fake children’ in his home, in unaired footage that was eventually leaked. At Paris Fashion Week, during his YZY runway show, he posed next to far-right political commentator Candace Owens with ‘White Lives Matter’ shirts. During an appearance on the podcast Drink Champs, he claimed that George Floyd was killed by fentanyl, not the police officer who kneeled on his neck for nearly nine and a half minutes.

Frankly, we could be here for hours listing all of West’s controversies, from saying that slavery was a choice to publicly harassing his ex-wife to announcing plans to buy Parler, the far-right Twitter rip-off. We’re so pathetically used to West’s rants, bigotries, and hatred that many of us have just tuned it out, hoping that maybe not fuelling his ego will make him disappear. Alas, ignoring the trolls has never been an effective strategy. Now, as West becomes a new figurehead of antisemitism across America, with Nazis making supportive banners on freeway overpasses in L.A., he’s finally seeing some sort of repercussions.

George Floyd’s family announced plans to sue West for $250 million. Brands are finally dropping him from their roster. Balenciaga severed ties with him. His longtime agency CAA has stopped representing him. Agency heads Ari Emanuel of Endeavor, Bob Gersh and UTA’s Jeremy Zimmer have all called for Hollywood companies to sever working relationships with West. Vogue editor Anna Wintour, long a supporter of West’s fashion endeavors, has reportedly ‘had enough’ of him, according to Page Six. This also comes after West publicly attacked a Vogue editor, Gabriella Karefa-Johnson for criticizing his White Lives Matter stunt.

A completed documentary about West was fully scrapped, with the producers announcing that ‘we cannot support any content that amplifies his platform.’

Variety reported that West’s streams, airplay, and overall album sales have fallen in recent weeks, which is kind of surprising given that his fanbase seemed pretty cool with all of his Trump crap and cozying up to accused abusers like Marilyn Manson.

A variety of celebrities have also called out West, including (somewhat obliquely) his ex-wife, Kim Kardashian. She doesn’t name him, which is kind of weak, but the effort is there, I suppose.

Hate speech is never OK or excusable. I stand together with the Jewish community and call on the terrible violence and hateful rhetoric towards them to come to an immediate end.

Fuck Kanye West and Fuck Donald Trump. And Fuck anyone who worships their anti-Semitic, greedy, cowardly, pathetic, pampered celebrity asses. Fuck you all.

Would any executives at @adidas like to comment on this? Or is their relationship with Kanye West and money more important? Asking as a Jewish woman.

Thanks to Kanye, anti-Semitism is on the rise. Despite calls to not stand with an anti-Semite, this @JudiciaryGOP tweet has been up for 3 weeks. RT if we should conclude Judiciary Republicans support Kanye’s war on Jews. https://t.co/HbRDXevlIa

At this point @adidas can take their shoes, clothes, and whatever the f**k else they make and shove them up Kanye’s ignorant ass. They have remained silent for too long and have shown us who they are.

Don’t watch the Kanye interview. Don’t retweet it. Don’t give him oxygen. Sending love to my Jewish friends and family and strangers. 💜

Then, all eyes were on Adidas, with whom West collaborated on his Yeezy line. This partnership has been extremely profitable for Adidas. In 2020, sales for the sneakers reached nearly $1.7 billion in annual revenue. The company previously announced that it had placed its partnership with West ‘under review’ following the White Lives Matter shirts, but they’d been quiet in the past week or so following his continued antisemitism. This morning, they finally announced that they had ended their partnership with West. In a statement, they said:

‘Adidas does not tolerate antisemitism and any other sort of hate speech. Ye’s recent comments and actions have been unacceptable, hateful and dangerous, and they violate the company’s values of diversity and inclusion, mutual respect and fairness.’

West has gotten away with a LOT for many years, in part because many have justified his hatred as a symptom of his struggle with bipolar disorder. Yet it’s also undeniable that his status as a so-called ‘genius’ has seen him protected with a shield that has continually empowered him. Sure, it sucks that he’s wearing MAGA hats and calling slavery a choice but hey, he made ‘Yeezus’ so it’s all okay, right? We know this cycle, the snake eating its own tail of awful people who are consistently given justification for their nastiness because they’re apparently too talented for us to dispose of. Even if every West album was as good as My Beautiful Dark Twisted Fantasy — and let’s be clear, he hasn’t been that consistent in YEARS — then it still wouldn’t be a good enough reason to keep him around.

Now, he’s become yet another figure of right-wing celebration, another part of the ‘cancel culture’ commodification that sees the braying likes of Tucker Carlson, Piers Morgan, and the GOP embrace him as an icon who ‘sticks it to the libs.’ Notice how many Republicans who tweeted their support for him went really quiet when the Nazis started throwing salutes in his honor.