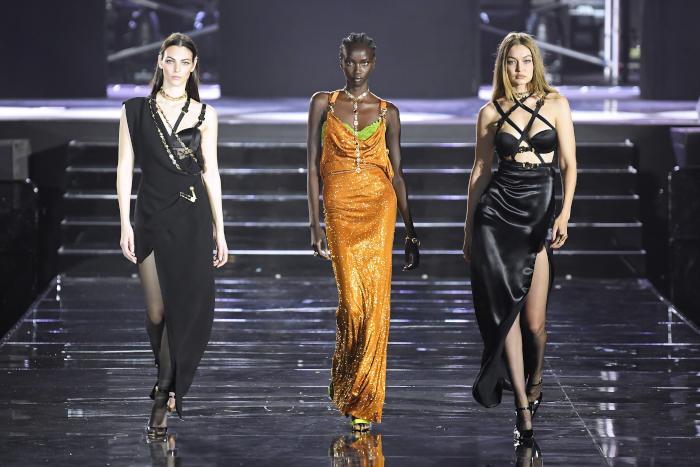 Here’s one thing you didn’t know about cishet men: Every one of us can name one model we think is underrated. I mean models specifically because every cishet man can name several models, and not just from Leonardo’s black book and/or Victoria’s Secret and/or Sports Illustrated’s Swimsuit Edition. Every. One.

Ninety percent of the time, the reason said models are underrated is because the fashion industry hates things like boobs, curves, or not looking emaciated. But for the remaining 10%, it’s because they need to make way for the less talented children of rich and powerful people who were also lucky enough to be born into good-enough-looking genes. The more famous their parents are, the stronger the chance they will get a cover in Town & Country or Tatler by the time they turn 16, then covers from international editions of Harper’s Bazaar until they can make the jump to international covers of Vogue. And then there are some that can ride their parents’ clout all the way to the cover of US or UK Vogue before they turn 25. They don’t need to be, like, really, really, really, ridiculously good-looking. Just… white and thin.

Suppose we were to give a little bit of credit to nepo babies in the fashion industry. In that case, we could argue that if you were raised by famous parents, with all-access passes to every kind of runway or fashion event since you were born, of course it would be natural for you to be inclined to take your first money-making steps in doing fashion stuff. Because your parent’s fame and likely wealth is partly tied up to their physical attractiveness, of course you will fit the fashion industry’s mold for models and it will all flow naturally.

I mean, let’s face it. If all your life you have been living that L.A. lifestyle, it’s not likely you were encouraged to become a doctor.

That is still no excuse to act defensively and claim you are a self-made woman, Kylie, or worse still, to claim that becoming the face of Chanel Nº5 is like the children of doctors becoming doctors themselves, Lily, and to top it all by painting legitimate criticism as misogyny.

Oh, honey! Sweetie! Yes, you are deserving of those patronizing monikers, because a) I don’t think you’ve ever seen the inside of a University … unless there was a runway show where they rented one of the Sorbonne campuses; and b) The only reason you got the jobs you’ve gotten is because of your parents. Don’t get me wrong, you’re a beautiful young woman, very chic. Luckily you inherited mostly your mom’s genes. But you are 1.63 meters (that’s 5’3” for the Americans) tall in an industry that discriminates against everyone below 1.75 (5’7”), which is a bad thing, but don’t kid yourself that you would’ve gotten the same career without the same clout. I’m not even going to mention your film career.

But if Lily Rose-DEPP’s comments irked those of us in the civilian world, they made a number of popular and veteran models simply SNAP. By veteran, I mean young women still thriving in the industry, because just like the US Armed Forces or the NFL, the fashion industry is so messed up that a couple of years of service can give you the thousand-yard stare.

Notice I am only saying that they “SNAPPED” and “READ NEPO BABIES FOR FILTH” because I’m a messy bitch who lives for DRAMA, but don’t be mistaken; they were more sanguine, insightful, and eloquent than I could possibly be if I were in their very tall shoes. They did it via Instagram stories, without resorting to the bloody Notes App, with classy and chic white letters over black background. But still, they dropped truths and burns, embedded below for your enjoyment. All credits go to @ModelsFacts at Twitter, the original curator of these reactions. Thread linked here, because we no longer embed tweets.

Vittoria Ceretti, a model big enough to go by her first name on Instagram, opened up the conversation reminding these nepos that for models like her, losing a job means actually losing money, and they don’t have a whole support team to hold their hands through frustration:

Followed by Anok Yai, featured in the banner picture with Vittoria and Gigi Hadid (a nepo baby who likely would’ve had a career anyway). Having gotten her breakthrough thanks to a viral picture of her serving, she reminded the industry that modeling is a Job that is exponentially harder for Black Women. 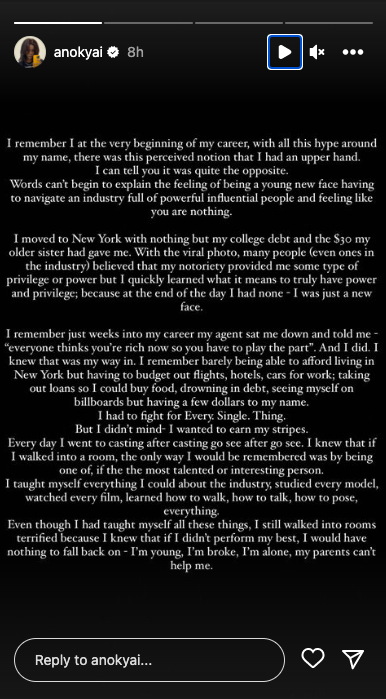 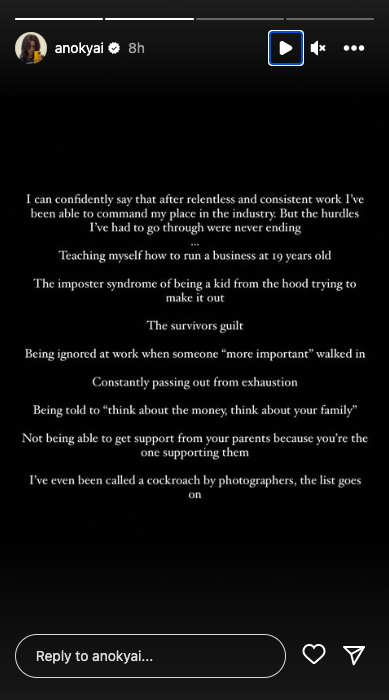 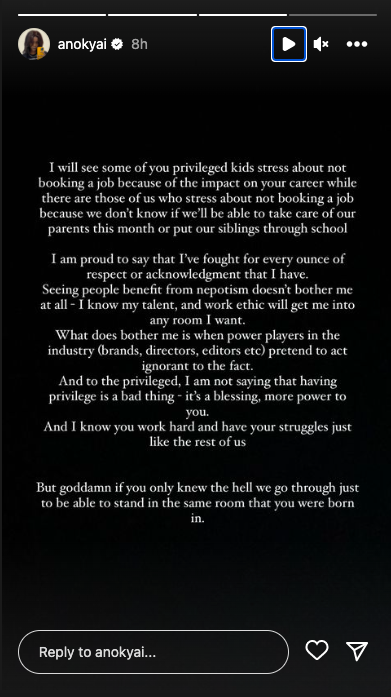 Nyagua Ruea told further indignities of nepo privilege, such as being able to arrive late and jumping ahead of the queue during castings, fittings or shows. 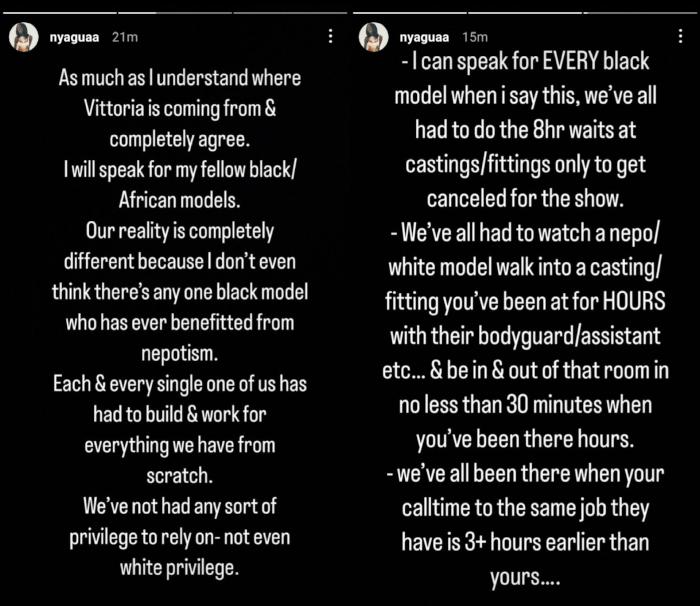 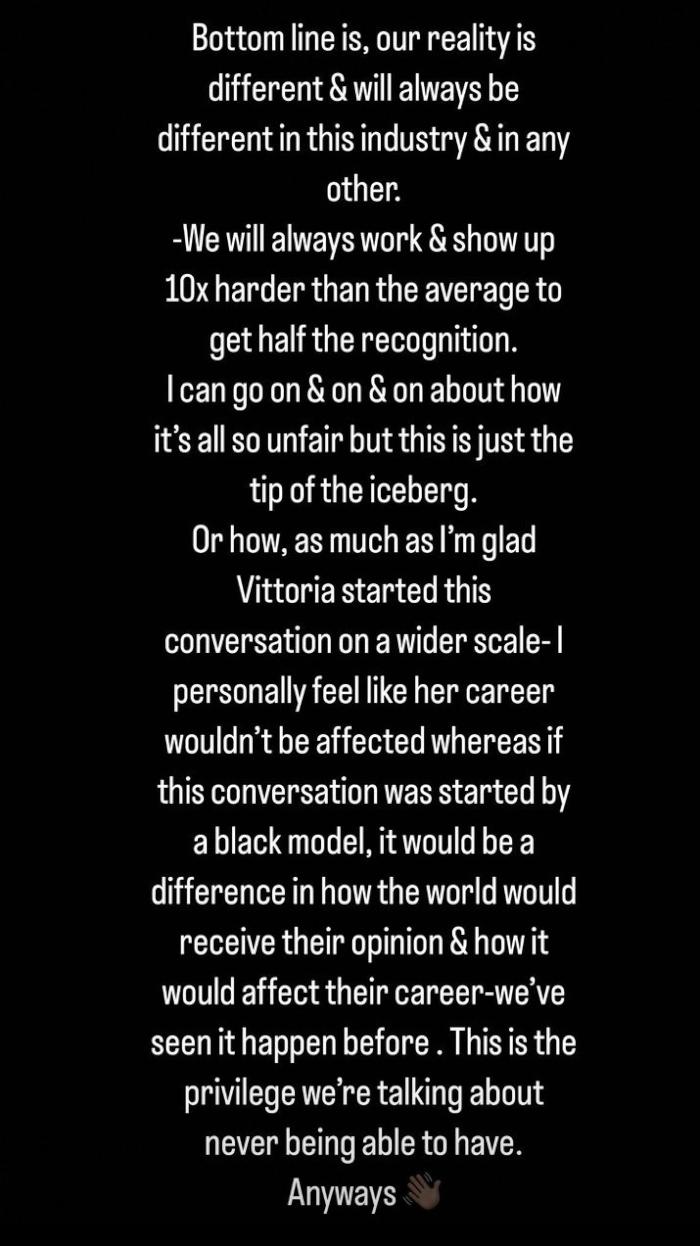 Aweng Chuol, a refugee of South Sudanese origin like Nyagua and Anok, came in reminding the nepos that they maybe should shut up when so many of their colleagues are not just coming from marginalized communities, many of them fled countries experiencing wars or dictatorships.

French model Assa Myriam Baradji told of how being passed over for the nepos is the kind of heartbreak that erodes your sense of confidence in an industry that feeds on it, and can actually make you lose money. 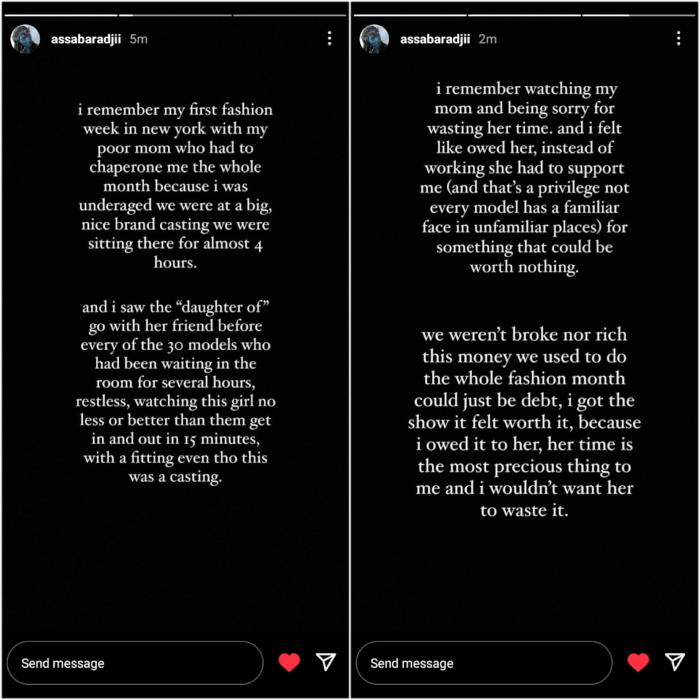 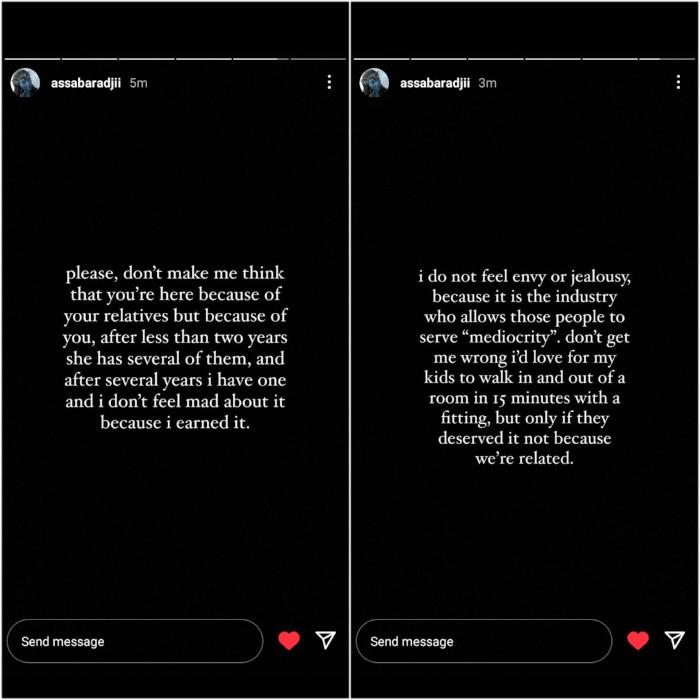 Brazilian model Gizele Oliveira was too tired to be diplomatic. She simply said the same things I wrote above: 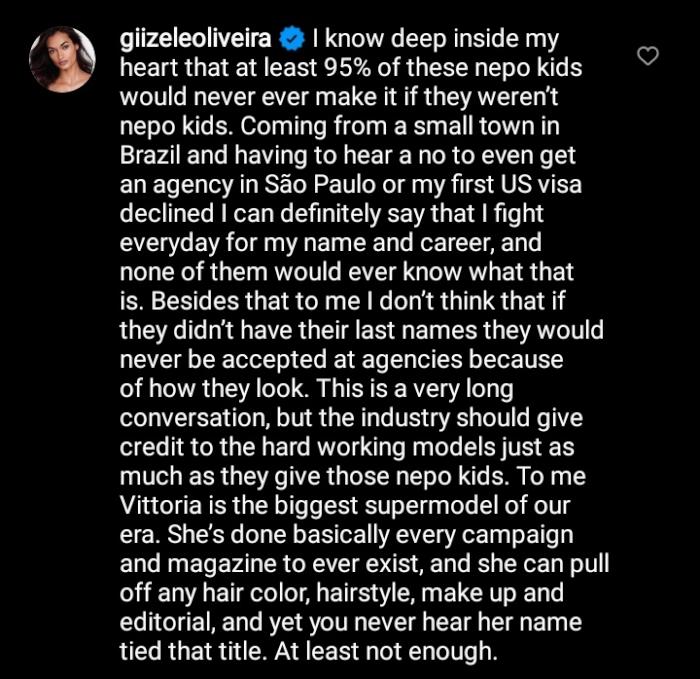 To cap this, Ecologist Scientist and Model Zinnia Kumar responded by providing a detailed breakdown of the intersections between racism, capitalism, and nepotism in the industry, on Instagram. I promise you I wrote the opening paragraphs before reading her post, but since she said it much more intelligently and with pure scientific rigor, consider mine a vulgar copy. 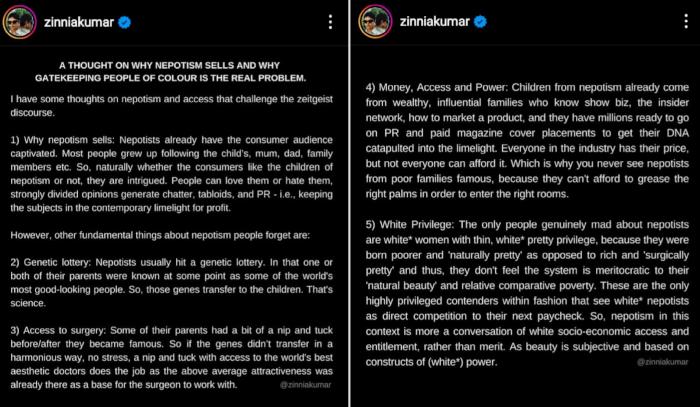 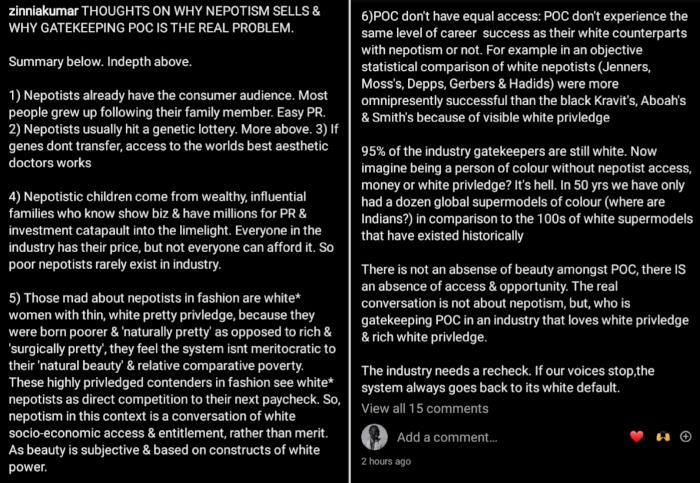 This is as good a reminder as any that fashion models do have labor union initiatives. Check Model Alliance if you are interested or you have a child who wants to get into the industry. It might be the first union that may need and could draft provisions against nepotism, because, unlike other industries, it’s just so damn visible.


← 'What's a Common Element From '90s or 2000s Sitcoms That Has Aged Poorly?' | Review: 'Disenchanted' Isn't as Magical as its Predecessor →