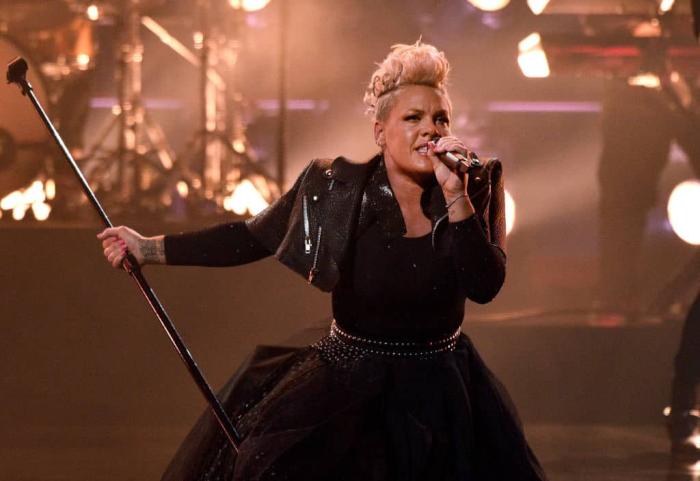 15 Years On, Pink’s ‘Stupid Girls’ Stands as a Misguided Feminist Call in the Age of Bubblegum Misogyny

In 2006, when I was 16, hating famous women seemed to be the culture’s most beloved pastime. Britney Spears had been a pop culture battering ram for years and her very public breakdown was a year away. A couple of years prior, the Paris Hilton hatred had culminated in a South Park episode with the title ‘Stupid Spoiled Whore.’ Janet Jackson had a new album to promote but couldn’t escape the public ire from her Super Bowl wardrobe malfunction. Amy Winehouse released ‘Back to Black’ and jokes about her appearance, rehab visits, and increasing addictions were about to become every comedian’s favorite punchline. The Chicks weren’t ready to make nice but a whole load of Republicans continued to hold them up as public enemy number one. This was the era of TMZ and Perez Hilton, a time where paparazzi were at their most vicious and tabloids held immense sway over the cultural discourse.

As a teenage girl who consumed a lot of pop culture and finally had a home computer, this was a dizzyingly confusing time for me. Feminism was a burgeoning concept in my mind, but I lacked the wherewithal to fully explore it, and I wouldn’t fully until I was in university a couple of years later. In the UK, press meanness towards famous women exploded alongside the prime of the lad’s mag fetish, and it never seemed to dawn on anyone that this combination proved curious at best. In America, things were even more disjointed. There was a heady mixture of the growth of the purity movement and Bush-era stripping of sex education in schools unfolding right as Girls Gone Wild, the mainstreaming of the Playboy brand through reality TV, and pop culture default of raunch took root. None of this was new but to adolescent girls trying not to drown under the smothering contradictions besieging us at every turn, it certainly felt so. So, when singer Pink released a song named ‘Stupid Girls’, it felt like a much-needed scalpel cutting through the crap.

‘Stupid Girls’ is a song about how our gender is going to the dogs because a whole generation of girls has been brainwashed into wanting to be spoiled heiresses with tiny dogs, a love of ass-shaking, and a penchant for bulimia. ‘What happened to the dreams of a girl President?’ Pink asked. ‘She’s dancing in the video next to 50 Cent.’ Pink’s targets were pretty clear: Paris Hilton, Nicole Ritchie, any and all video vixens, Jessica Simpson and her Daisy Dukes, and, of course, Lindsay Lohan. ‘Where oh where have the smart people gone,’ Pink laments. The video, which features Pink in a variety of roles complete with fake tan, bleached blonde locks, and inflatable boobs, ends with a young girl choosing to be ‘smart’ over being ‘stupid.’ Rather than choosing to play with dolls and make-up, the ‘bad’ choice, she picks a football, some books, and a keyboard.

‘Stupid Girls’ was, at that point in time, the highest-debuting single of Pink’s career. It got her a Grammy nomination and a slew of positive reviews, including one from J.K. Rowling. The author and transphobe declared that the song ‘is the antidote-anthem for everything I had been thinking about women and thinness.’ As many critics who hailed it as a feminist bop wrote it off as a superficial attack on the wrong people. Still, in the public consciousness, the message rang loud and clear. Pink was fighting against the ‘bad girls’ and she was the ‘smart’ one by comparison.

When it came time to write this piece, I was almost impressed with myself for how I was able to recite every lyric of this song from memory (plus the interlude in the video where Pink does vocal fry and pretends to induce vomiting with a toothbrush), despite having not listened to it in years. I keenly remember hearing the song at the time and thinking about how on the money it seemed. It seemed like the only dissenting voice in a sea of bare midriffs, Pussycat Dolls, and songs about doing it for your baby. Sure, it was the bluntest and most bad-taste version possible, but it wasn’t an era of subtlety, so of course a lot of us latched onto it. It was the pop version of Female Chauvinist Pigs, Ariel Levy’s polemic against raunch culture that sparked many a conversation. It was a strange mixture of feminism and post-feminism, and for a generation of young girls with no real understanding of those terms but a visceral discomfort with pop culture’s sexual obsession, it was what we had.

Of course, it aged about as well as milk. Hell, it was cruel and dated at the time, but as with a lot of mid-2000s celebrity, it took us some time to re-evaluate things. We’re now in a period of serious reconsideration for that time, particularly relating to women like Britney Spears but also the likes of Whitney Houston, Amy Winehouse, the Page 3 models of UK tabloids, and even politicians like Hillary Clinton. Internalized misogyny will sadly never go away and there is, dishearteningly, still a lot of money to be made from commodifying that (hello, every transphobic f**ker in the think-piece realm), but I do think we’ve gained a sliver of intersectional nuance on such topics. At the very least, some of us have been penitent enough to recognize our mistakes.

What stands out to me about ‘Stupid Girls’ now, revisiting it 15 years after it dropped, is how staggeringly nasty it is. It’s not just that Pink is lambasting these bad faith narratives about good girls versus bad ones with no sliver of acknowledgment for how effing hard it is to survive under patriarchy; it’s that she gets hyper-specific in her targets. Even if you don’t watch the squirm-inducing video, you can listen to that song and know exactly who she’s angry about. It’s Paris, it’s Britney, it’s Jessica. It’s that hyper-narrow era of over-sexualized white womanhood that conquered the market while being the ire of every Helen Lovejoy or Bill O’Reilly out there. We look back at old Britney interviews now and are slack-jawed by how callous and invasive some of the questioning was, but it was pathetically normal back then. The virgin-whore complex had never been more potent, with the male-dominated entertainment industry endlessly packaging thigh-slapping sexiness as the default mode then throwing those women to the wolves when the backlash hit. It’s not that we expected Pink to add a few lines to ‘Stupid Girls’ about how misogyny encourages women to hate one another rather than examine the source of the rot, but the starkness of her intent still feels like she’s giddily playing into the wrong hands. It’s not that there’s an entire capitalistic force behind women like Britney that coaxes them into impossible positions; it’s that they’re ‘too stupid’ to be anything else.

Pink’s own evolution as a musician would probably merit its own tin-eared anthem. As Ashley Reese wrote for Jezebel in 2019, Pink’s early career was heavily defined by her proximity to blackness. Her music was hip-hop and R&B inspired, and she even talked up her supposedly racially ambiguous nature in interviews. Musically, she was still pretty sexual. Her stage name, after all, was a reference to the color of her vagina (that’s only one of the origin stories she’s shared over the years.) She was more the ‘badass rocker’ kind of sexy, with short hair (sometimes in cornrows) and black nail polish. Nowadays, she’s more an inspirational pop figure, flying across stadium audiences on wires as she tells them to believe in themselves and be who they want to be. She’s a wife, a mother, a boss, and someone who wants the best for everyone. In 2019, she leapt to Jessica Simpson’s defense after she was attacked for letting her young daughter get her hair dyed. In terms of women in pop, she’s navigated the industry pretty well and endured in a way many of her contemporaries weren’t able to.

I’ve never been able to find any recent responses from Pink to ‘Stupid Girls’. At the time, she said she ‘love[d] the discussion that’s going on right now. There’s always a backlash when you challenge people’s convictions and their heroes.’ She wanted to reassure people that ‘Sexy doesn’t have to come with the price tag of being dumb.’ Her musical and personal evolution suggests she’s probably got some mixed feelings on that song. It’s a song that makes a lot more sense when you realize she co-wrote it with four men.

← So, We're Still Doing 'How I Met Your Father,' Huh? With Piz? | No One Wants Stephen Miller's Bachelor Pad →