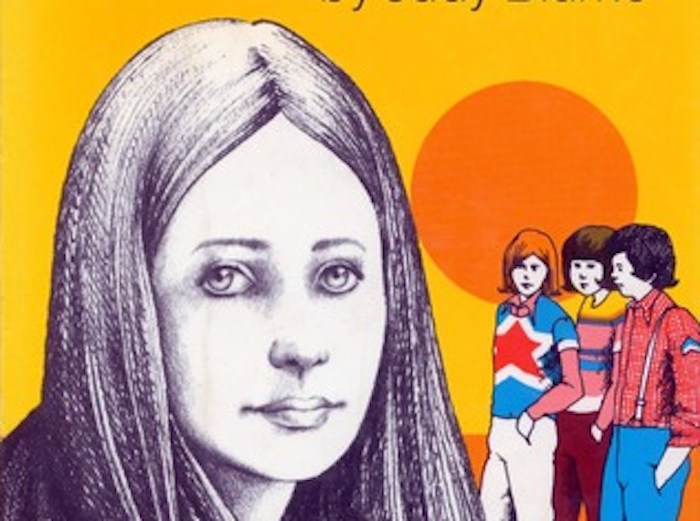 Fun fact about me: I have mild scoliosis, which I didn’t find out until I was in my late 20s and my acupuncturist, of all people, casually mentioned it to me when she was sticking me with needles. As in “oh, you have scoliosis, right here!” and then she ran her fingers around the curve in my spine where it was. I mentioned this to my mom the first chance I got, because I figured it was something that I probably should have known about, and she said “yeah, some of you kids have it, but I forget which ones. It was never severe enough to do anything about, though.” The joys of being one of five kids, I suppose.

Anyway, the first thought that popped in my mind during that whole thing was “just like Deenie!” Bless Judy Blume, the impact she’s had in my life is immeasurable.

“Deenie” is about Wilmadeene Fenner, or “Deenie” a beautiful 13-year old whose mother is forcing her to try to become a model. Only Deenie isn’t that into the idea as a whole, but as her mother always told her, Deenie has the looks, and her older sister, Helen, has the brains and it’s a sin to waste either gift—so it’s off to the modeling auditions she goes. Only there’s a problem for Deenie—she’s got the face, but her posture is terrible. Naturally, her mother, who is very pushy, blames Deenie for this and makes her practice walking straight in order to improve.

Deenie doesn’t improve, and after a failed cheerleader tryout (which was done behind her mother’s back, because Mama Fenner believed Deenie can be a model, and a model only) Deenie’s gym teacher calls her into her office after school, and has her bend over and touch her toes. Easy enough, right?

Only it’s not, because after visiting a series of doctors (and bending over and touching her toes, a lot) Deenie is told she has scoliosis and must wear a Milwaukee brace for the next 4 years until she’s 17. Here’s the hitch: Mama Fenner was told by someone that if a child model hasn’t made it by 17, they won’t make it, so there goes her dreams of being a stage mom on par with Kris Jenner. Alas and alack.

Mama Fenner takes the news about Deenie, well, let’s just say poorly—hemming and hawing over it, and crying, because like I said, she wants to be Kris Jenner, basically. Deenie tries to make do with the brace, but it’s Deenie’s dad that saves the day. Refusing to let her wallow in self-pity or take the brace off for special occasions. It’s just something she has to do to fix her spine, and there’s no use in making a bigger deal out of it than it has to be.

I appreciate Papa Fenner, his is the right approach.

For basically everyone in Deenie’s circle, her brace is a mild curiosity, but since they’re all teenagers, they soon get wrapped up in their own inner lives. Deenie, who is not the most kind or empathetic person in the world, begins to appreciate a classmate she once shunned, like Barbara, who has terrible eczema which causes her to itch constantly. Poor Barbara—that sounds extremely uncomfortable.

What I love about “Deenie” is that Deenie, once she has her brace, doesn’t turn into a more caring or understanding person. Sure, she’s willing to talk to Barbara, finally, but that’s only because her brace makes it hard for her to get changed quickly in gym class, and she’s self-conscious about it, so she waits until everyone else is out of the locker room to get fully changed. As a result, she’s forced to partner with Barbara because there’s no one else left to partner with. She’s not happy about it, and — even after they become friendly and Deenie decides she’s a rad person — when Deenie develops a rash (because she refuses to wear an undershirt between her skin and the brace) her first thought is that Barbara’s “creeping crud” is what caused it. It may not be the nicest thought, but it certainly felt authentic to me.

There’s also a girl named Susan who clearly worships the ground Deenie walks on, copying her style, and even the impromptu haircut that Deenie gave herself when she was feeling ugly after putting on her brace for the first time. Deenie is an outright b*tch to her, going so far as to say that Susan’s haircut would have been better had she not gone to a hairdresser and done it herself as Deenie did.

Blume allows Deenie to remain herself and doesn’t require her to go through a fundamental transformation, just because she now has to wear a brace. How often do our protagonists “suffer” and then become a better person in YA books? Our girl Deenie doesn’t and I love Blume for letting her stay her, warts and all.

The book ends gently, like most Blume books do, with Deenie deciding that wearing her brace is just something to get on with, and it won’t be as unpleasant as she initially thought it would be. She chose the Papa Fenner route, thank god.

So, upon re-read, this isn’t just a masturbation/scoliosis book. It’s really about the weird, possibly unrealistic expectations parents put on their children. Helen, Deenie’s sister, doesn’t make much of an appearance, but when she does, it’s almost always in relation to the way her mother treats her.

Helen is written off by her mom as unpretty, because her hair is a little oily, and she has some acne. All of the pressure is put on her to get good grades, while Deenie is allowed to skate by with C’s because it’s all about the way Deenie looks.

Blume purposefully never describes what Helen looks like, but I think it’s safe to assume that the two sisters probably look pretty similar—except one has the pressure to be pretty and the other doesn’t. It’s a trip, but both girls seem to be under an equal amount of pressure from their mom for reasons unknown, but she’s a housewife who spends all her day cleaning (per the book) so maybe she’s just kind of bored? I don’t know, this book was written in 1973 so there may be some underlying feminist message here. No disrespect to housewives if that’s the way you want to live your life, but if you’re putting that much pressure on your kids, something is probably missing in your own life.

At one point, towards the end of the book when Mama Fenner has gotten Helen’s secret boyfriend fired from his job at Papa Fenner’s gas station, Helen explodes. She rips into her mother that the pressure she put on both girls to look and act a certain way doesn’t allow them to be themselves—and here’s the best part. There’s no resolution. Mama Fenner isn’t going to change, just like real life. There’s no Full House, very special moments here. It’s up to the girls to get on with it and live their lives, regardless of what their mother wants for them.

It’s Deenie’s mother who wants to make exceptions for Deenie not wearing her brace for special occasions, and it’s her dad who insists she must wear it at all times. By following in her father’s footsteps, Deenie, in a small way, rejects the boxes her mother is trying to put her in—but this is all accomplished without any sort of internal monologue or big scene between the two characters. It’s just there for you to see if you want to see it.

This is why I love Judy Blume because she lays it all out for you, but she never shoves it in your face—and even at 34, reading “Deenie,” a book I’ve read dozens of times (the only Blume book I’ve read more was “Starring Sally J. Friedman as Herself” which I read so much that my mom finally had to threaten to take my copy away from me to get me to finally read something else) still feels fresh to me.

So, if anyone ever gives you grief for reading YA, you can give them as much s*it as possible in return because what Judy Blume can accomplish in 173 short pages is a lot more than some of those literary authors could ever hope with 500+.

Next week we’ll be doing “Sunburn” by R. L. Stine, which is a bananas Fear Street that involves a shark attack on attack dogs, so be warned.