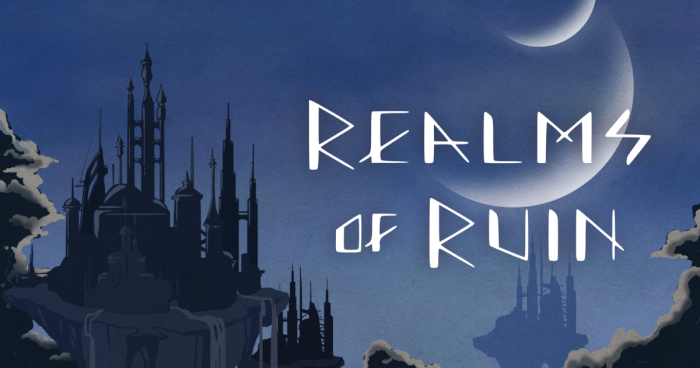 Some YA Authors Announced Plans to Create an NFT Project for Fans. It Did Not Go Well

NFTs are sort of everywhere these days. The craze of non-fungible tokens, a form of blockchain technology used to represent anything from videos to artwork to memes, exploded in a major way this year thanks to a select series of high-selling works. The basic idea is that you can buy an NFT of, say, your favorite piece of digital work, and it’ll establish you as its true owner. Yes, everyone else can still look at that art for free online and you can’t stop people from reproducing it, but you own it, or something. Yeah, NFTs are kind of dodgy. Ownership of one does not inherently grant copyright of the item, they’ve become ripe for plagiarism, and they’re also disastrous for the environment thanks to the high energy use required to make and store them.

To me, NFTs seem like a seriously suspicious kind of business, even before we get to the sheer nightmare of its carbon footprint. It seems like a way for rich people to spend their cash after they’ve already been to space, done all the cocaine, and avoided paying their taxes. I’m all in favor of artists being paid and for the legitimizing of digital works, but this seems like a major financial bubble waiting to burst.

One thing we haven’t seen a lot of in the NFT space is literature, probably because that community already cornered the market on digital works via self-publishing, transformative fanfics, and so on. Some authors, however, felt that the book world was eager for some hot NFT action, more specifically the young adult world. You know, that demographic that’s flush with cash and bulletproof to manipulative tactics by their favorite celebrities.

Enter the Realms of Ruin.

Yesterday, YA Twitter exploded when it was announced that several best-selling and highly popular YA writers — Marie Lu, Tahereh Mafi, Ransom Riggs, Adam Silvera, David Yoon, and Nicola Yoon — were joining together to create Realms of Ruin, ‘a collaborative fantasy epic filled with dark magic, intrigue, and unique characters — launched online in a thrilling new way.’ Said way is, of course, ‘a robust collection of original character NFTs, a sweeping fantastical world, and twelve origin stories, all built on top of the environmentally friendly Solana blockchain.’ The idea is thus: Fans, presumably young ones who make up the core demographic of YA fiction, can join this ‘world’, buy the NFT character cards to play in this story, then create their own narratives that can then be minted into NFTs ‘whose value could rise as your readership does.’ Emphasis on ‘could’ there, I suppose. As this world grows, built off the backs of paying readers, ‘the authors will be reading closely to decide which stories and characters are compelling enough to become canon.’

If you’re thinking that this sounds dodgy as f**k, that’s because it is. Gee, let’s create a world, make people pay to play around in it, allow them the chance to expand upon it with the scant possibility of making a few quid, then choose whether or not to integrate it into our world for further gains. Yikes. Multi-level-marketing ideas crossed with NFTs crossed with fan-fiction is a real mess.

The YA world, of course, quickly revolted. Such is the danger of trying to screw over young people who generally have progressive views and are highly allergic to bullsh*t. The predatory nature of marketing NFTs towards teens with the promise of getting to work with their favorite authors was called out, as was the environmental issues of the entire trend. Lu tried to call out ‘misinformation’ over the latter part by pointing out that they would use Solana, which they claim is far more environmentally responsible (spoiler: there’s no such thing when it comes to NFTs.) It seems especially on-the-nose for a bunch of authors mostly known for writing dystopian YA to engage in something this destructive for the planet.

Also, Solana is currently being hyped as ‘edging closer to a breakout’ in the crypto market, which would require more people to buy into it and help raise prices. Most crypto platforms also require users to be over 18. When asked about this particular issue on their Discord, one server admin responded that they were ‘hoping to have a way for people who can’t purchase SOL to request a small amount for our shared treasury for minting stories.’ So… they just want teens to give them money, no middle-man nonsense?

One member points out that many platforms require users to be 18+ in order to buy cryptocurrency.

Quite a problem if your target audience are Young Adult readers.

A server admin replies that they are “hoping” to have an alternative where young people just… ask for money? pic.twitter.com/B4VrmDATnv

Things only seemed to get messier on the Discord, with admins not seeming to understand copyright law or ownership, the permanency of this project, or the potential targeting of young people (the website lists copyright as belonging to the main authors.) It seemed evident to many that this NFT plan had been somewhat haphazardly put together. That seemed especially clear once the authors went into panic mode and started deleting everything. The Realms of Ruin site is now down, as are its Twitter and Instagram pages. The involved writers started issuing vague ‘we hear you’ apologies.

Marie Lu, the author who got all the other writers on board, went from claiming people were spreading ‘misinformation’ and that she wanted to teach ‘aspiring teen writers that their writing is valuable and worth money’ to apologizing in a few hours. 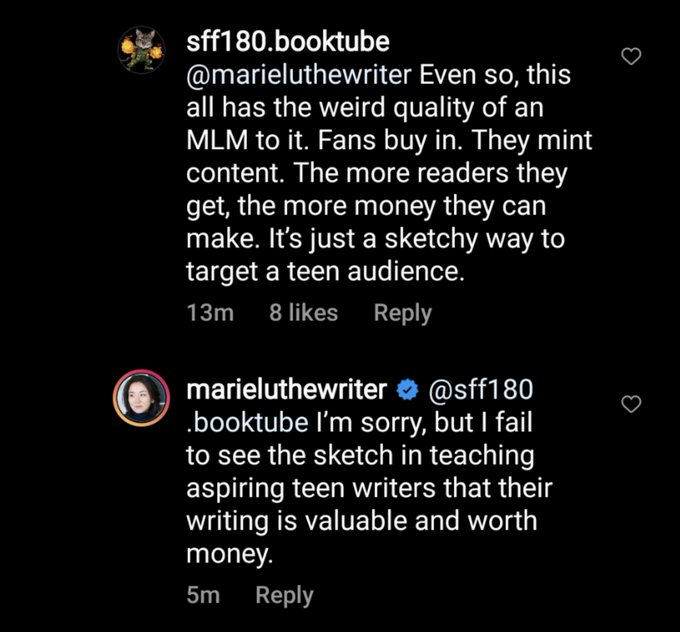 Hey loves. 💛 I’ve known you guys for a decade and you all deserve some answers, and while I have answers, it doesn’t really matter at this point—what matters more are the feelings this project has elicited from you all. We’re taking a big step back as a result, and

Please know that everyone involved with the project had only the best intentions & are some of the best people I’ve ever had the honor to know. I’m open to your msgs, but ask only that you offer the others some kindness today; they’re people w good hearts & genuine motivations.

Some of you have been expressing real concerns and feedback about our Realms of Ruin and I’m here to say I DEEPLY APPRECIATE YOU. ❤️ For now, we’re going to hit pause, take a step back, and figure out how—and even if—to proceed. Much love to all!

Hi everyone, I want to let you know that we’ve heard your concerns about the RoR project.
We’re all going to rethink and step away from the project.
We really & truly appreciate all the feedback.
Lots of love to you all.

And then, a couple of hours later, Realms of Ruin was officially scrapped.

Thanks to tremendous effort from the #WritingCommunity, Realms of Ruin has officially been scrapped. pic.twitter.com/X2qVLUn42m


This whole thing was a disaster from the beginning. Who was this for, other than the authors who clearly thought they could sell profit and exploitation as ‘collaboration’ with their paying fans? The entire enterprise reeked of a scam, one that the creators barely seemed to understand even as they implemented it. Collaborative spaces like this exist. They’re fanfiction sites and roleplaying communities and a whole lot of long-time ideas not rooted in crypto-bullsh*t or hogging of copyright. There was nothing ground-breaking or ‘fresh and exciting’ about Realms of Ruin. It was basically fan-fic with added strings. Dangling the possibility of creative freedom and profit in front of your young audience while hogging the copyright and the rule of canon is some Big Name Fan nonsense. I’m glad they scrapped this but this never should have gotten out of the ideas stage. It was a catastrophic mess that was always going to implode, and they eventually pulled the plug after mere hours because they didn’t want to risk future book sales.

Go write your own stories. Don’t let anyone try to scam you into pretending there’s ‘innovation’ in doing all the hard work, paying for the privilege, then having someone else cash in on it.